Some infos about me. The last official bio isn't included here
because you can read variations this one everywhere else anyways.
I thought it would be pretty fun to read the oldest ones I could find.

The latest one is included in my press pack. You can request
the press pack if needed. The old ones obviously are hard to find these days.  So I do it that way, just  because for the fun of it... :)

(I think this one was the first official one ever... One year after I released my debut-single "Daily Disco)

Tobias Luetzenkirchen describes himself more often as sound engineer or programmer, because he doesnt like the word "producer". In his eyes being a real producer includes different kind of work to do in and out of the studio.  Working for years with the big names in the electronic music scene (for example Ramon Zenker (Hardfloor))  and co-produced/co-written several chart-hits (..3 spain/..7 england and around 8 chart entries in the german sales charts with peak positions around the top 20) now has come his time for focusing on his own stuff.

Nontheless he does a lot of productions for other artists as well. Sometimes with his name on it (Acquaviva & Luetzenkirchen) but most times ony in the credits. In Spring 2006 he teamed up with electro grandchampion Tomcraft, adding up their skills to introduce the Craftroom Studio and with the support of Systematic Label CEO Marc Romboy
he founded the brand-new label "Tabula Raza"

Indeed, he hasnt even reached the age of 30 yet, but hes been around in the studio scene since the early nineties. Beginning as a vocalist for several dance projects and giving his face for some advertising and modeling jobs 92, he started learning production/engineering techniques 99 with the first chart entry one year later. He would say that his production skills simply outclass his dj skills but nevertheless a lot of people at the clubs he played would say he has some serious skills at the turntables also.

This Summer there are already Gigs around the Globe including hot-spots like Paris or Rio De Janeiro. There will be also a live act in the near future.  Luetzenkirchen not only loves music, he lives it. and through it.
he also played always in several bands over the last 10 years and is absolutely open minded to other musical influences than electro only, even with the electronic music style being his greatest, his "one love".

Since the debut of "Solo Artist Luetzenkirchen", where his name appeared for the first time, there has just only passed one year and he managed to make it to the german top electro elite in a few months, including superhot remixes for the likes of Coburn (Luetzenkirchen Remix hits straight Number one on Beatport), John Digweed (soon on Bedrock), Yello (soon) or Meat Katie (soon).

Most descriptions end like this, but in this case you can bet on it: expect more to come.

I was very fortuante to play in dozens and dozens and dozens of wondeful countries around the globe. However at some point the schedule was so hard it nearly broke me. Once I had 5 gigs in 7 days and the route was "Brazil -> Germany -> Mayday -> Australia -> Japan. That time was pretty hardcore.

Do I miss travelling the world the whole time? No.
I miss a lot of the people I met though. I also don't have the stamina anymore to pull such a schedule off like the one I had. Right now it's -  (ahem, was...before Covid-19, we'll see what will happen...) - relaxed and easy. I like that I still play in different countries quite regulary but I don't like the travelling so much anymore like I did back in the days.

(This one was from around 2007, one year before all hell broke loose with the release of "3 Tage Wach" in germany..)

A lot has happened since the groundbreaking release of Daily Disco on Great Stuff Records in Spring 2005. Yet one of the most successful Great Stuff Releases ever, praised by the top djs around the globe.
Since then a lot has changed for that "Luetze"-Guy.He did a hell-a-lot of productions in 2005 (i.e. LXR, LK-Pro, Elektroluxx, Bully Boys, Mike Litt, L.Y.T.Z., Electronauts and so forth) with most of them being played by nearly all the big names in the electronic music game. Keep your eyes and ears open.

More than once people noticed that often there is that Luetzenkirchen name in the credtis, even if the name is not on the frontcover of the record. Same for the remixes.There are also a really huge amount of remixes done by him as well, with a lot of variation between them and like many people noticed: "as usual, always on a very high production level, adding to the "brand" of quality that people now start to expect from Luetzenkirchen productions".  And he delivers.

Then the fall came, followed by the 2005s second most downloaded track of the year on beatport: "Zombie", where Luetzenkirchen teamed up with John Acquavia, closing the year with the second Luetzenkirchen Single Counter Funk, including one of the best Oliver Koletzki Remixes ever and the highly acclaimed bside track "lazy dog bites the dirt".

Luetzenkirchen, seeming to be never asleep, keeps pushing on, ready to unleash a spectacular remix of Coburns "Give me Love" in the beginning of 2006, again a Beatport Number 1 for several weeks and an international slammer. In the meantime he moved to Bavaria/Munich, and throws together his studio equipment with electro veteran Tomcraft, engineering all tomcraft tracks & remixes from this time on.

With Tomcraft on top on all that other things he has to do, they are starting off with a tomcraft remix highlight on Bloodhound Gangs "Uhn Tiss" Single. BHGs Jimmy Pop was so excited that there will be a feature-single with Tomcraft very soon. "Luetze" produces. And will deliver. High quality, as always.

Beside of this, Luetzenkirchen founded his own dropout label "tabula raza" with Systematic Label Manager Marc Romboy, with the second release waiting just right now in pipeline.Oh, and yes, Luetzenkirchen still has time to play dj-gigs as well. And like its nothing new, a lot of them. Round the globe.

But his intentions ain't being a superstar-dj.His plans for the future: From being *a* producer to become one of *the* producers. If its possible, not only in the electronic music. One of his biggest dreams is to write a full movie score with a classical, orchestral background.
We are sure, whatever the goal is, he will deliver.By the way: luetzenirchen is his real name. 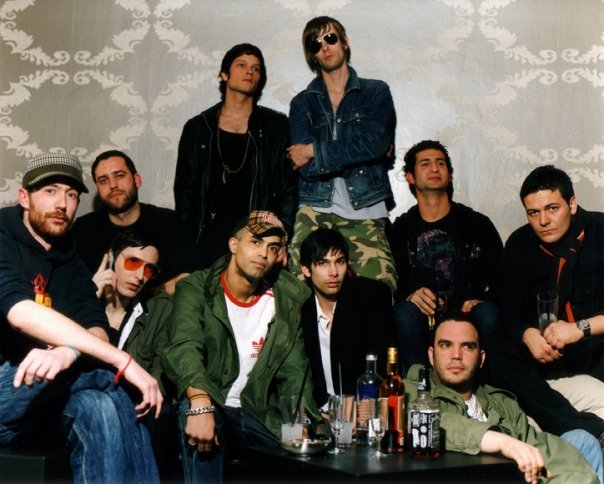